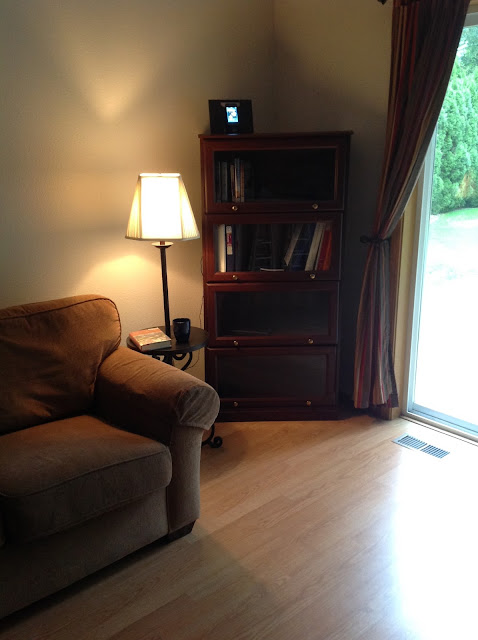 You guys have been the greatest supporters through all of these uncharted waters that I've been sailing through since August. Well, actually, you've been great all along. The last few months have just shown me exactly how great you all are! Thanks for sticking around and continuing to comment too.

This weekend flew by in a flash. After a yard sale where we picked up my FAVORITE print ever, a mirror, two sets of silver, a couple of other prints, a little side table, some costume jewelry, and a free monopoly game (all for less than $40), we headed back HOME. We had some billing to take care of and some restocking to do.

Being home was nice. We had lunch at the local sit down joint and I took a minute to bask in the familiarity of it all. Do you want to know the two things about a new city that I'm not loving? I'm a blogger so, of course, I'll tell you! One: The lack of a corner grocery where you're considered a regular. Two: The traffic. It's not the waiting or the lights or any of that that gets me, it's the fact that every outing feels like trying to figure out HOW to get where you are going without getting clipped by a motorcycle (there are some VERY poor operators in this area) or a little car that's decided to squeeze somewhere it shouldn't.

Sunday was my favorite. It was rainy and chilly. We came back Saturday so that we could go to church at "our" church. I saw Joan again and introduced myself to two more people (Julia and Jamie). Hmmm...Apparently I am drawn to people whose names begin with "J". Fun fact: My best friend growing up was Jordan. We joined our friends at their church for a potluck that afternoon. My brother and sister got invited to join a bunch of their friends for some ultimate frisbee. My Mom and I spent the rest of the day sprucing up the house with some of our finds from a quick yard sale run that morning. I've decided that I'll be showing you guys corners of this house. It's going to be a long while before an entire room comes together 100% and with all of the the thrifting that we're doing I'm not sure that any of them will be totally cohesive.

This post is really about Sunday. Once that little corner above was all set, we turned my latest favorite Pandora channel (Early Jazz) on. Combined with the quiet house, the rain coming down, and the knowledge that we had nowhere else to be that day, it felt like HOME. We read, wathced the next episode of Tommy and Tupence (which you need to watch by the way) and then after a while we played some backgammon (I won the first two games and she won the last one). After making fajitas, we called it a night.

For years, we've spent labor day weekends at the ranch. Slowly, that tradition has become hit and miss. With everything that this weekend held, I'd say it was a great substitute.


How did you spend the holiday weekend?

What are your favorite fall comforts?
Posted by Victoria at 6:59 AM 6 comments:

August was a crazy month full of the final stretches of house hunting, house buying, the county fair, auditions (for my brother and sister, who both landed parts), a week with my friend's daughter just after she turned SIX, and then of course, the initial "voyage" to the new house.

On Sunday I went to TWO churches and ended that night happy and full. I LOVE spending time with God's people!!! We tried out a church we plan on being a part of that morning and then joined some friends of ours at their church for an evening hymn sing. I'm eager to get involved and relieved that the wait is over.

The last week has been nothing but adventure. You should know that we're up to two chairs, a sleeper sofa, a big couch, one end table, and a cute little round table for the breakfast nook (which we got for 50% off yesterday)! I can only imagine what September is going to look like at this point! I've got some hopes...The main one being a somewhat predictable ROUTINE! :) In the meantime I'm currently...


Reading: "The Sea Keeper's Daughters" which happens to be the very last book on my summer reading list.  It's getting off to a slow start, but I'm sure it's going to be good. I'll keep you posted with a full review SOON.

Making: Lists of things we need for this house. It's strange to cook in a half empty kitchen.

Anticipating: Whatever the next few months will bring. My birthday NEXT Saturday. Book club discussions on "Dollbaby" which happens to be this month's read in my Read It. You should join us!

Loving: My family. I've been a pill lately (worrying, stressing, and freaking out on the first night here when a guy creeped me out) and they've loved me through it allllll. God. He is SOOOO faithful and SOOOOO GOOD. This half summer/half fall weather. I LOVE summer and I really LIKE fall. I guess you call this the best of both seasons.

What are you currently up to?

I skipped out on the "pinning" section that Jenna and Anne assigned, but I'd love to see a board you've been working on lately...Especially if it's fall related! Do you have one?


You guys, fall is in the air. It's even starting to show itself in the leaves. As much as I love fall, I am never eager to see summer go. As always, fall starts showing up and slowly but surely, I come around to welcome the changes even though I know they mean that winter really is just right around the corner (the PNW is a funny place when it comes to seasons).

September 1st happens to be one of my favorite days of the year. It's sort of like a second new year for me. Fall whips people back into shape after summertime living. Since my birthday is just eleven days away, that adds to the whole "time is ticking" aspect in my own life.

A few weeks ago I drafted some resolves for this fall. So far, I've got four going:

Listen - to God and to people. Be slow to speak and always listening.

Journal - more and this "new" way. Let it out. That space is private.

Continue with Galatians - it's been a while, pick it back up and keep at it. Stick with it.

Think - read your Bible and look at the world. As you do, stop to think and pray. When understanding comes, thank God because it's from Him. Don't settle for just floating along in a fog.

Fall is a time to quiet my soul and to discipline my mind. With inspiration from the Bible, L'Engle, Piper, and my own personal goals for myself, I'm ready for a fall full of God's grace!

What are your resolves for this fall?

Is there a time of year that feels like a second new year for you?
Posted by Victoria at 9:22 AM 7 comments: