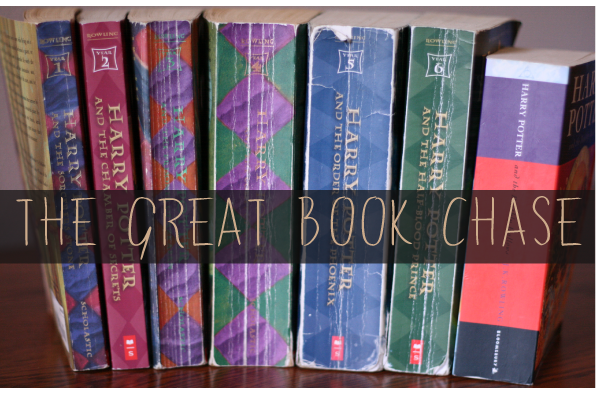 My love for used books started about four or five summers ago when my Mom and I started scoping out library sales during the small town festivals in our area. Sometimes I'll see a book at several sales before I finally realize that I'd better buy a copy. That's what happened with Harry Potter and the Chamber of Secrets.

I'm not sure who I have to thank for the hunt that began during the summer of 2013 when I decided to buy that first Harry Potter paperback. I'm thinking it's a combination of my brothers, Amy, and Robyn. The four of them were constantly telling me that I just HAD to read these books. Everyone is shocked to find out that I've never read the whole series.

My Grandma bought my brother and I the first three HP hardbacks as they were released. I read them and then stopped. I mean...Number four is LONG. They were releasing movie versions AND I wasn't sure that I would be able to pass the test to get the points I needed for the Accelerated Reading program at my school. I watched my brothers devour them right along with my Mom, I got just as excited about everyone else each November when a new movie was released. But I never read the books.

So, I bought that first book and The Great Book Chase began. I promised myself (and my brothers, and Amy, and Robyn) that I would look for the books and that as soon as I had them all, I would read them. I wasn't sure how long it would take, but I was determined! My rules were simple, each book had to: come from some kind of used book sale, be paperback, and cost $2.00 or less.

As of October 2016, I officially have the entire HP series in paperback. It took years and if I remember correctly, it cost me about $4.29. 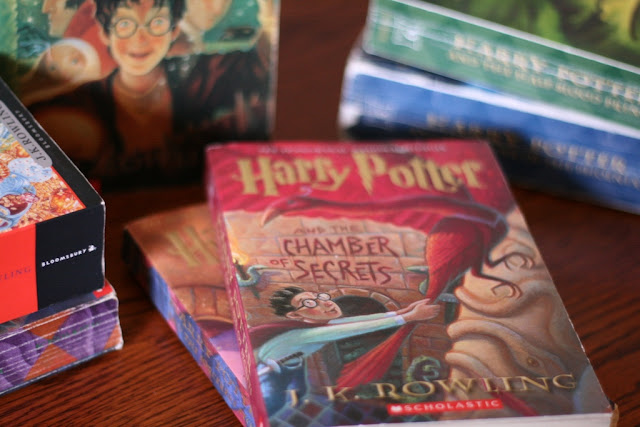 I can't remember where I got the first book. I THINK it was during a book sale in the basement of the library in a town 40 minutes away from where I grew up. I wish I could remember, because it seems so important, but I can't. Once The Chase became "official", I started keeping track. In 2014 I picked up the second book at our town's own big book sale that my family used to help with. I was sooo excited about finding it unexpectedly. 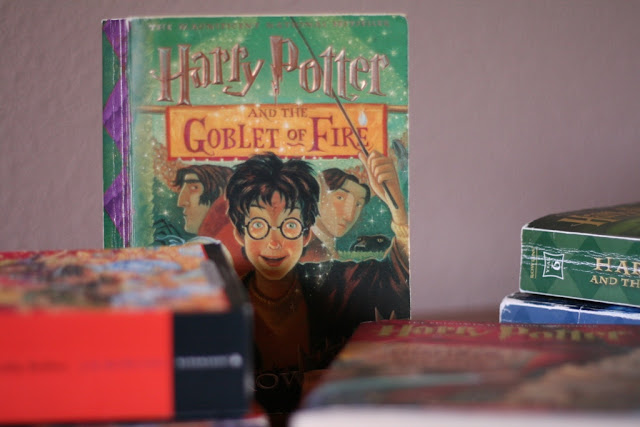 Most of a year went by and I found number four at a goodwill while we were in town for my brother and sister's drama class. 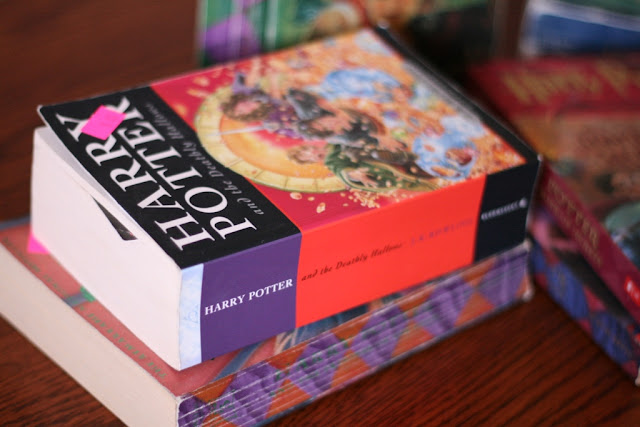 Most of another year went by and my brothers were starting to get impatient. I'm sure both Amy and Robyn forgot alllll about it. But, I was always looking. Occasionally my Mom and I would go out with the single purpose of chasing down another book in the series. Last Christmas she and both of my brothers were super close to buying me a brand new set. I told them to be patient, but I knew that I was running out of time. I HAD to find these books.

The strange thing about HP is that you'll see TONS of Sorcerer's Stones, quite a few Chamber of Secretses, and every now and then you'll see The Goblet of Fire. But, tracking down 3, 5, 6, and 7 seemed IMPOSSIBLE. They just aren't out there. I don't know if people stopped buying after 1 and 2. I don't know if people that have books 3 and up actually LOVE their books and aren't willing to part with them. Either way, it certainly made the book chase a little more exciting.

So, I put a little more effort in this year...I found numbers 3 and 7 at a thrift store that benefits a local animal shelter on June 14th. It was during one of "The Great Book Chase" excursions. We went to every single store, several yard sales, and looked at EVERY SINGLE BOOK they had. We found them and I scooped them right off the shelf. This store wanted $1.00 each, which was okay with me. I was in for a special treat. 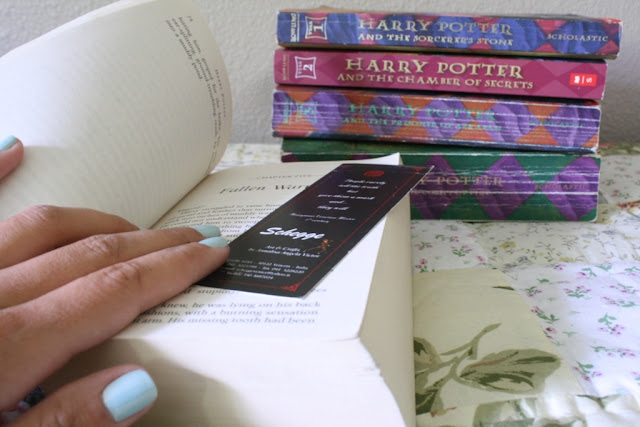 Once I got out to the car I was looking at my copy of The Deathly Hallows. It turns out that it's the UK version and it had a bookmark from Italy tucked in at chapter 5. I snapped a picture and texted it to my brother. 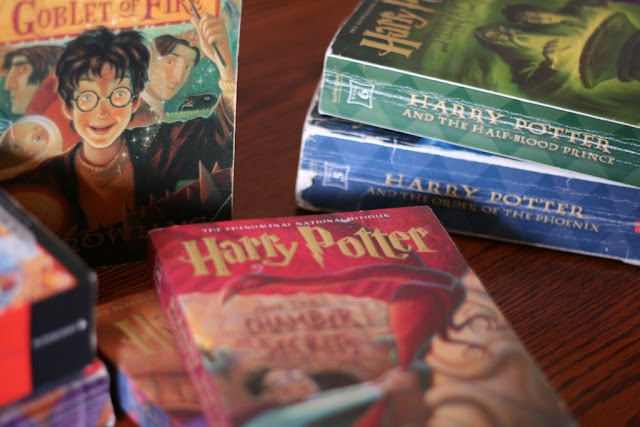 After that exciting discovery, we were pumped. Not only was I getting closer to having the whole set, but I now had one book that seemed to have come from some super interesting person. I kept hoping that I'd run into another one of their discards. Before I knew it, summer was over and we were focusing on getting our house packed up. My little HP obsession was on hold.

Then, a few weeks ago, my Mom and I were out on a Sunday after church looking for "relics" for our church's Reformation Day celebration. I wandered over to the books to do a quick glance JUST IN CASE. I found 5 and 6!!!! They were pretty beat up and I debated on whether or not I should get them. My Mom did what she always does and said that I didn't have a choice (thanks, Mom!!!). Books were 75% off that day and so I got them BOTH for about 29 cents.

My set was complete. 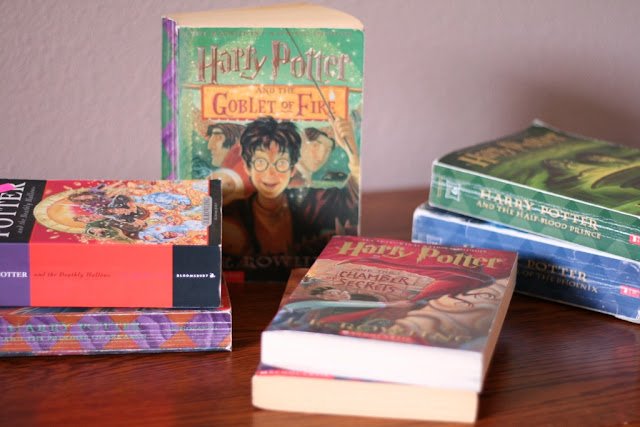 I always thought The Great Book Chase would end when it began, on some unsuspecting summer day. I pictured myself plodding through the books at the pool and the lake and out on the back patio. It turns out, I began my journey with HP on a Sunday evening in November. 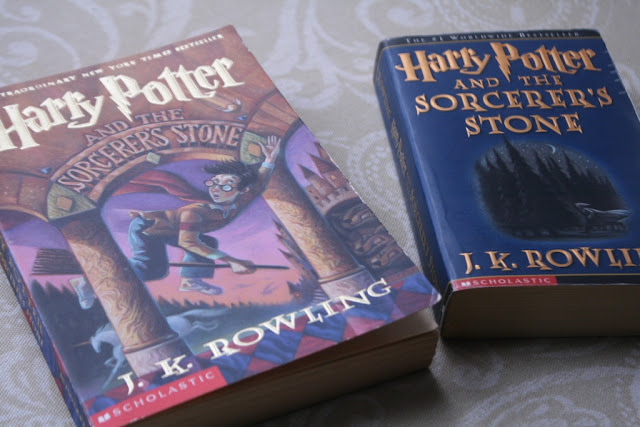 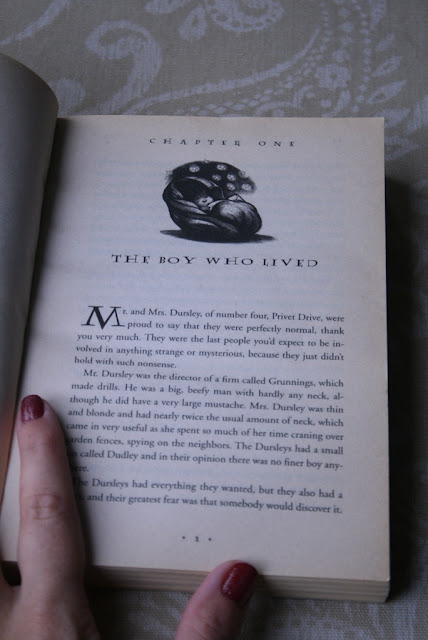 Something else exciting happened...My sister (who hasn't read ANY of them) has decided to join me! We read the first chapter last night taking turns after every sentence (we never read this way, but I knew it would be a fun memory to make, so we did this time). During the early days of the chase, I accidentally bought a second copy of the first book because I couldn't remember if I had it. She'll read that copy.

The hunt for my set is complete and after spending so many years chasing these books it seems strange to be "done". Maybe I'll start chasing down a set for my sister.


Have you read this series yet?

Do you collect used books? Which ones are you currently chasing after?
Posted by Victoria at 4:03 PM

I love hearing from you! Please be sure to leave your e-mail so that I can reply. :)